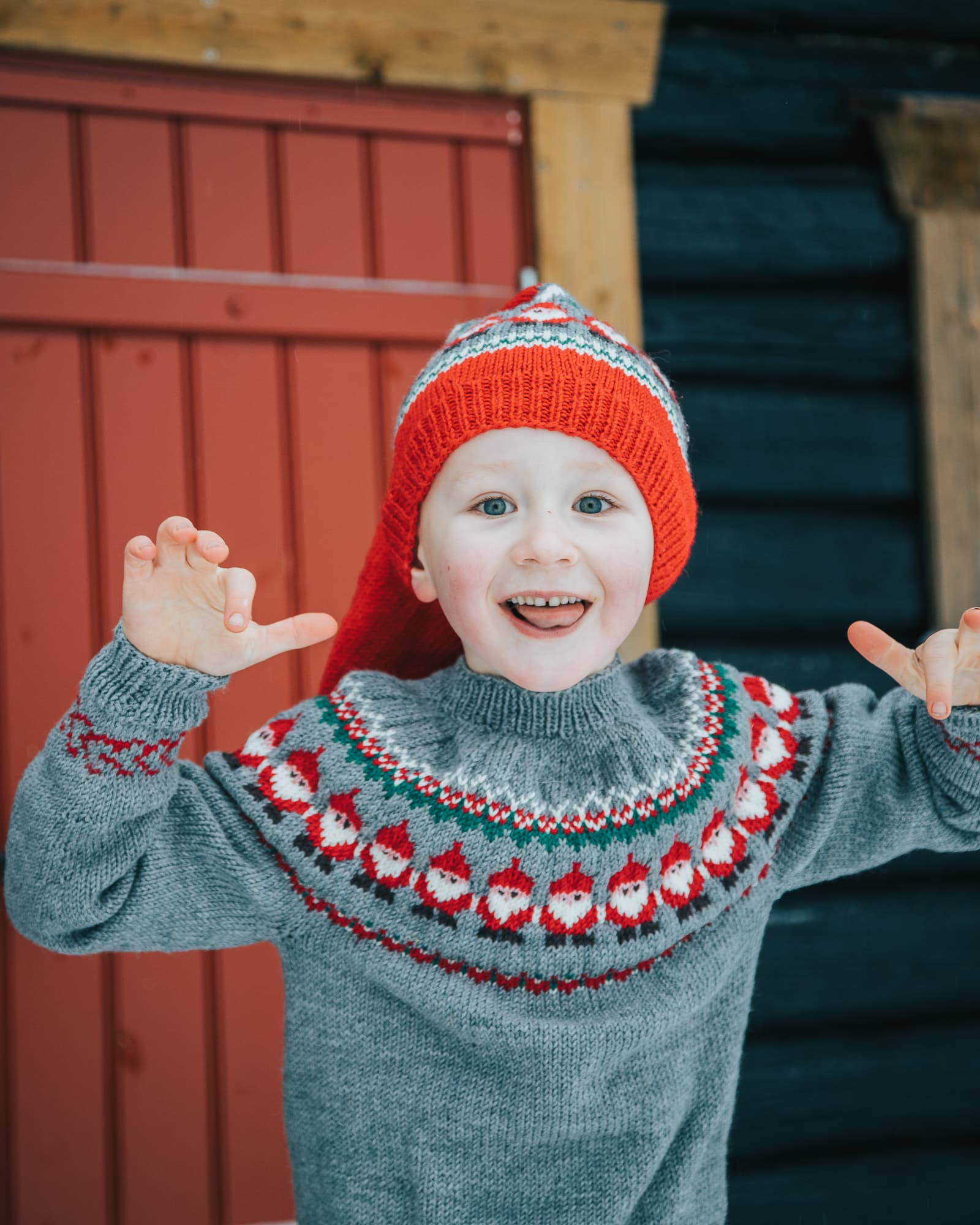 When skiing through winter wonderland we also made sure to capture a few images of Santas little helpers. Aren’t they they cutest?

We are blessed with people around us that provides us with the most amazing knitwear. Our boys have knitted sweaters for every occasion as well as overalls, tights, hats and mittens. We love to dress them in knitwear as it looks beautiful, is comfortable and keeps them warm.

Last Christmas our boys got new Santas hats from one of their grandmothers, and this year she had knitted them matching sweaters. The boys were so excited about having their very own Santa themed outfits, and both hats and sweaters have been popular on our walks through the forest or going to see the Christmas lights in Hamar.

Perfect location for a Christmassy photoshoot

In Budor there’s this area called Koiedalen where there’s lots of small wooden cabins around a small lake. Between the cabins there’s a short and accessible trail with natural playgrounds spread around here and there. We’ve had outings there through spring/summer/fall before, but haven’t been when there’s snow.

We had lunch on the porch of one of the cabins, and decided it was the perfect place for a photoshoot to show off the new beautiful knitwear. However we hadn’t accounted for the fact that Baby Boy was fed up with doing other things than playing freely. Oh well, Big Brother was more than willing to put on a show and we let Baby Boy explore the cabin and surroundings instead. You can’t force it. Or at least I don’t believe in forcing it.

We talked about the owls hooting and flying around between the treetops. Of the squirrel cracking nuts while hiding between the branches of the nearby pine. And of the fox lurking around in the background, making sure we’re not able to see his footprints before he’s left. Big Brother stated that they were all Santas little helpers. And Baby Boy made it clear several times that Santa Clause is coming to town – very soon. Oh, what a wonderful world of imagination we get to take part in.

I don’t think they understand that Santas biggest helpers are in fact themselves. They and every other child that truly believes. Now people might think that we’re wrong in playing along, that at least Big Brother needs to start questioning if this story about Santa is real. Well, we’re going to let them have their imagination for as long as they want. And when they do start asking questions, we are going to wonder and explore the truth with them.

I hope you’ve had time to enjoy this past weekend! And I hope you liked the sneak peak into ours. If you did, please leave a comment down below or give this post s thumbs up. I really appreciate each and every one of you that continues to read my posts and follow this years Blogmas! Take care, and I’ll see you tomorrow!