A golden walk through town – When I walk pt. 2 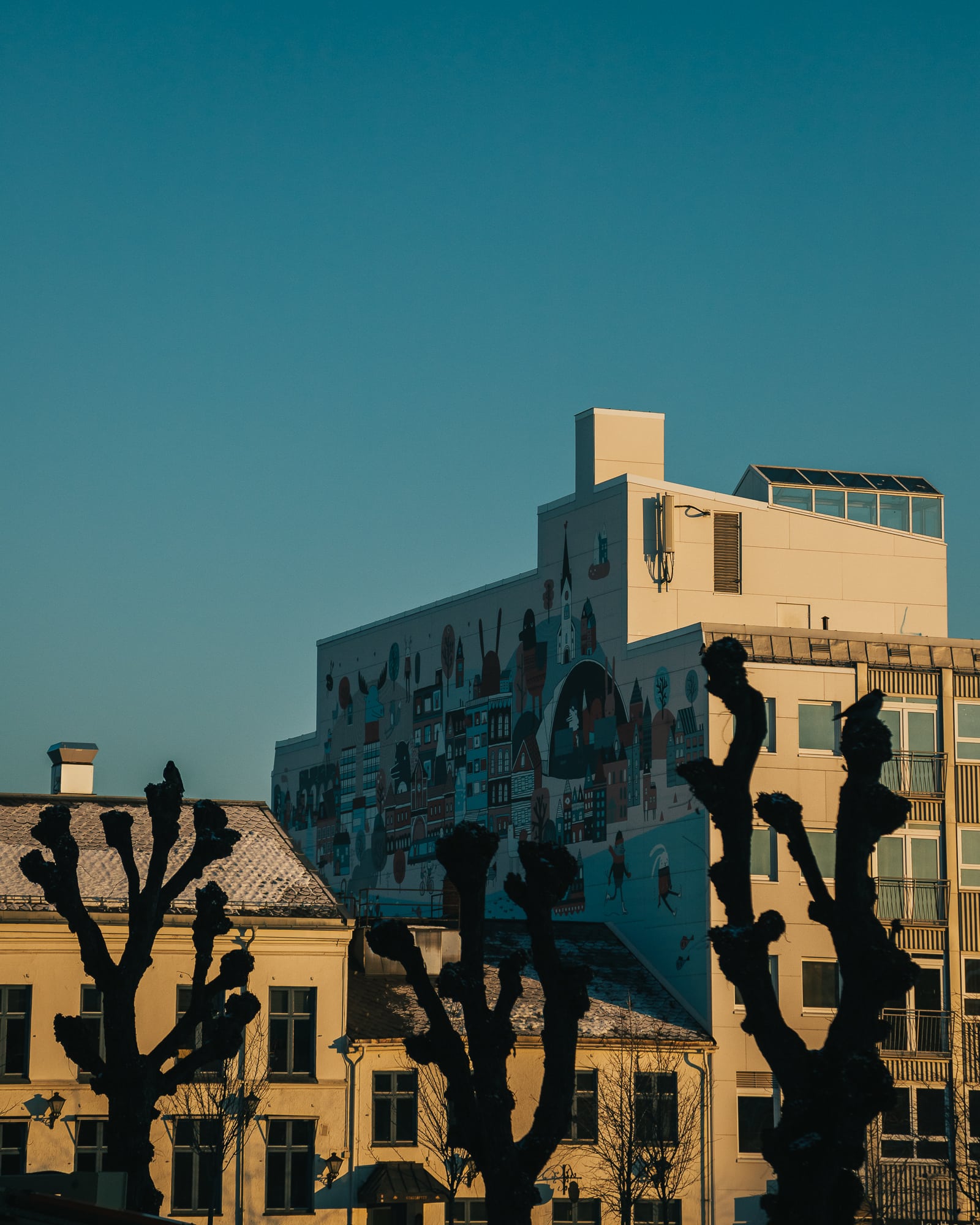 My goal is to share some photowalks from other areas than the one I live in. However the world isn’t open to visiting new places right now, and so today I bring you along on a golden walk through town. My town Hamar to be more precise.

Did you miss the last photowalk? Check out this one from the neighborhood forest.

The images in this post are shot with the Canon 6D Mark II and the Canon 24-105 mm f4. (Links to the gear are affiliated links, meaning I get a small cut if you decide to make a purchase after clicking on them.)

Not as boring as it seems

If you don’t live in Norway, I reckon you’ve never heard of Hamar. And even if you live in Norway you probably don’t know much about Hamar. Maybe you know it’s situated lakeside of Mjøsa, Norways biggest lake. Or maybe you know that it was one of the Olympic towns when Lillehammer hosted the winter Olympics in 1994. Apart from that there’s not much buzz about Hamar.

However Hamar isn’t as boring as it might seem. And during the almost seven years we’ve lived here it’s really grown on us and the people that come to visit. Partly due to the fact that there’s been a lot of development. Especially when it comes to the towns cultural scene, but also developing into a more urban town in general. Now when I say urban, it’s because I’m really kind. Hamar is by no means an urban town yet. But it’s way more urban than it used to be, while still maintaining a small town vibe.

No doubt it’s a lakeside town

I think most of the people that have lived here all their lives, in generations even, are most proud of Hamar being a lakeside town. There’s a saying among the locals that goes something like; “It doesn’t matter where I live in the world, as long as I can see lake Mjøsa”. And that pretty much sums it up. The lake is, at least how I as an outsider experience it, the heart of Hamar.

Right now they’re debating where to build the new and improved railroad, and the main thing people are concerned about is that we mustn’t shut the town center off from the lakeside. You need to be able to see the lake as you walk the streets downtown. I can appreciate the statement. If not for anything else, than certainly for the magnificent light that fills the streets as the sun is setting in the lake.

The architecture often gets a beating

Many of the locals in town have stated that the town center has been ruined, as one have neglected preserving the old houses of downtown. When you walk through town you see some of the old houses around. But I have to say I agree with those saying that a lot of the buildings have been replaced with much less pleasing aesthetic buildings as the town has grown. That doesn’t mean that all development has been bad though.

I’m a sucker for good street art, and I love the fact that more room has been made for this throughout Hamar the last few years. I’m also one of the weirdos in town that like the new shopping mall that are located just a few blocks from the main street. I appreciate those stating that it makes it more difficult for the shops on the main street to survive. But I think there are room for it in the long run. And I like how it looks.

Central, lakeside small town with a little urban touch – what more to ask for?

I love doing these photowalks no matter where I’m at. And walking through Hamar with my camera helps me appreciate my hometown a bit more. Because I get to see more clearly that I live in a central, lakeside small town with a little urban touch.

We moved here from a smaller town, or more of a village actually. Before that we’d lived in Oslo for ten years. We loved being close to nature in the small village. And we loved the urbanity of Oslo. When we moved we wanted to have both. However we soon understood that it wouldn’t be possible, that we had to settle for a compromise. And I think we’ve found a good compromise in Hamar. At least it’s a nice place to bring the camera out for a golden walk through town, right?

I hope you’ve enjoyed this golden walk through town with me. If you have, please let me know. Either by giving it a thumbs up, leaving a comment down below or sharing it with someone you think will appreciate it. Also; please consider subscribing to my blog. That way you won’t miss my next post. I post weekly on the topics of photography, filmmaking, outdoor adventures and exploring locally. Because you know; you don’t have to travel far to be an explorer, and there’s always more to explore locally.